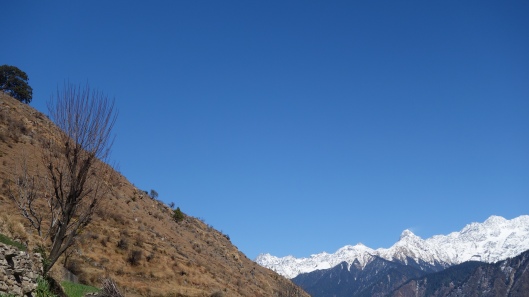 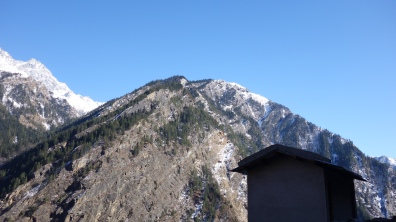 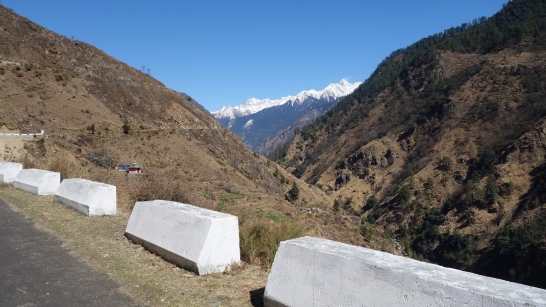 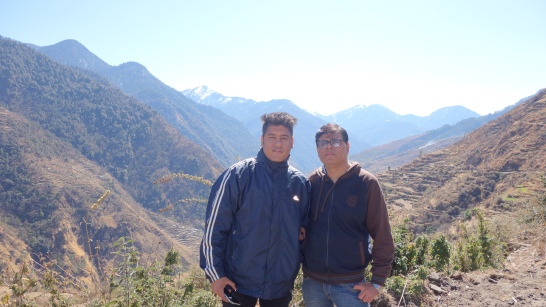 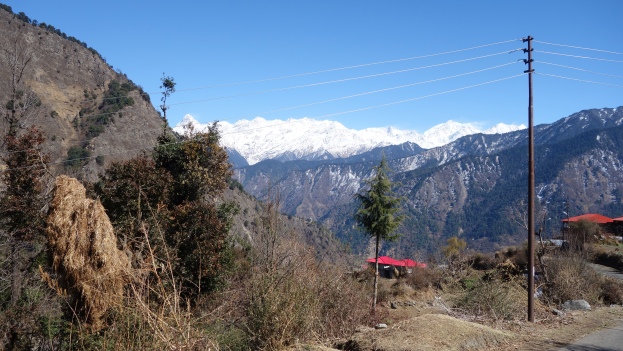 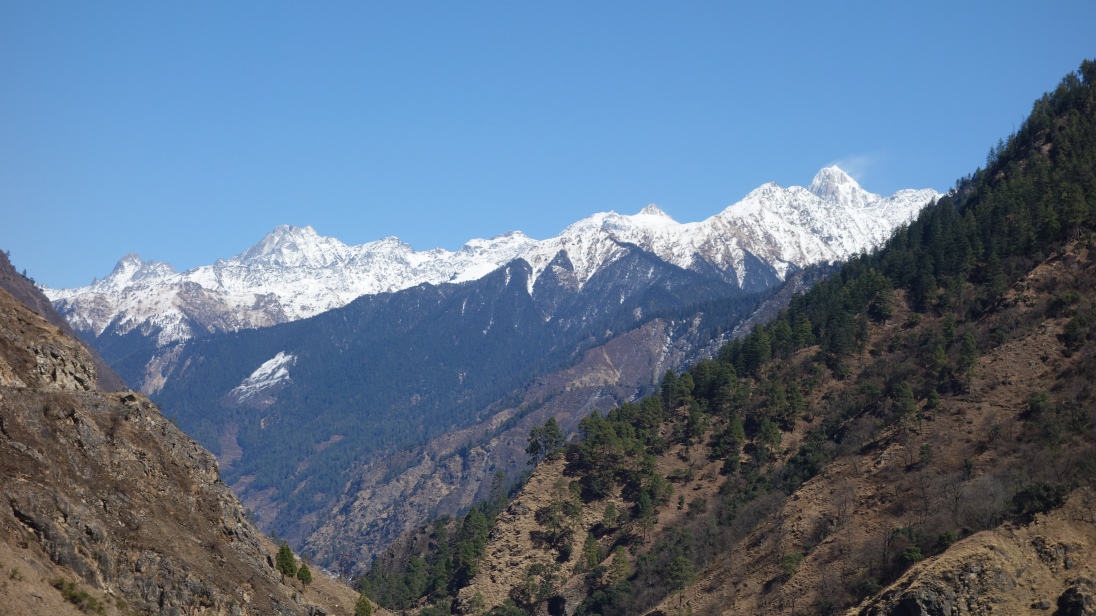 It was 5:40 when we finally took off from Rishikesh delayed by an hour as per our original plan. While in Rishikesh we satiated some of our hunger pangs and conversed with taxi drivers outside the bus stop, enquiring which roads are open and how far we could go.

Not planning exactly where we were heading, we took off to Tehri. Again, the road was good and bad in sorts as the work was on and the previous night showers and snow in upper regions had created chill. I thought the coming days were going to be spent in extremely cold conditions, nevertheless I was geared and prepared.

Reached Chamba around 8:15- it was deserted, dark and in a way chilly. But the star gazing was amazing! These two lads representing the younger generation dressed up and ventured out for star gazing for 5 minutes and came inside shivering. We had 2-3 wraps of quilts, blankets besides the warm clothes we were wearing. Did not feel like changing. The distance and travel time would have been shorter had I come from Dehradun via Mussoorie but then I was duty bound to pick my co-travelers.

Day started a bit early. The atmosphere was full of panoramic mountain views and bright sunshine. It was chilly despite the sunshine – the best nature could give you.

We sat in the car and started the onward journey to Tehri and from there to Gangotri. The first padao or halt we assumed would be Uttarkashi where we thought to have some grub.

We began the journey appreciating the mesmerizing view of the peaks. We were delayed by half an hour by our set time. The objective was to appreciate nature to its fullest and have as much of pure air in our lungs as could be inhaled.

However, the locals were out braving the chill. Little kids were heading to schools and the elders to work. There was not much hustle and bustle though.

We hoped that the weather and the road be on our side and if that be the case we shall have dual layered fun. We could safely assume to be the only tourists in the terrain and this feeling really mattered.

The FM stations were not working and it being an early morning by the hill standard…Bhajans is what we wanted, tried all the DVDs and MP files we had and luckily found 2 having bhajans in them. Most had gone out of order. By the way the DVD culture is totally wiped out and here we were possibly listening to music aided by something which has become thing of the past.

The drive was very mesmerizing with a view of Tehri dam on one side and mountains laden with trees on the other.

We halted at Chham for breakfast.

Omelet and slice is what we ordered and the guy did an excellent job of making the same to satiate our hunger and taste buds both.

We had cash by our side, no matter how much digital but you need cash in all these places.

We drove around 40 kms towards Barsu village from where the Trek to Dayara starts.

It was a very nice drive to the hilltop. You could see the women folks with all the fodder loads for the cattle and walking at double the speed that You and I could imagine.

We exchanged greetings with them, despite load filled backs they were very pleasant and welcoming, some of them who belonged to a nearby village even offered us tea. We ate and distributed lots of Glucose biscuits to the locals. It was a great binding factor and worked like a fuel – the biscuits on physical and the gesture on our mental stature.

The very first view of snow clad peaks and glaciers were so enthralling that we forgot everything else for the moment. I wanted to click every bit of it in my eyes so that it lingers for life and stays with me, however as stated earlier, being mortals, the physical energies were dwindling and we had to capture some moments in our cameras.

As we progressed the view stayed with us changing faces with each passing kilometer.

On our way someone wanted to hitch hike – this was a father and a schoolgirl duo. The girl had missed her cab. Good time for us to show humanity. I was feeling glad that I could make some contribution there at that point in time. I applied brakes and made the duo settle in the car. It was a blessing of sorts for me for I could strike a conversation with the father. Was amused to find that a sense of containment prevailed with him and with others as per his narration.

Soon we reached the spot – the school where they got down and with folded hands we were thanked! They offered tea to us as a gesture of thanksgiving. We thanked them and moved ahead without having the tea.

We had covered a few kilometers and on our way to Daryala Bugyal we had other guests. It was Shivaratri and all the locals were visiting the temples to offer jal..the holy water to lord Shiva.

A group of ladies sought lift…understanding how much they go and do on a daily basis I wanted to make every one of them sit, a king like thought but had a space constraint so I said only two could be made to sit. The elderly showed a great gesture and made the two youngsters sit- to be dropped to the village which was some 6-7 kilometers from there.

Now this was to have more perspective from locals, the youth wing. They were not shy and in fact sounded very informed. A sense of contentment prevailed in them. They asked us why not you also offer the prayers and seek blessings. Being in land of Shiva and not thanking him would prove detrimental hence we agreed to offer jal with them.

Sukhi Top was the place and Rishi kund was the temple. Innocence, love, trust, peace seemed to be the key possessions.

Imagine the road to temple-it was a road made with stones that had to be walked down and it was snow laden. The two young guys with me took full advantage and hurled snow balls at each other.

I stepped into the snow after many years. After visiting the temple felt more relaxed and assured. Assured that now I have God’s blessings hence will have uninterrupted onward journey. Trust me it proved that ways.

We wanted to explore the Dayara Bugyal, there were few lakes enroute.

It was 2:30 in the afternoon and we decided to trek. The locals said that it takes them 1 hour to climb. Being a marathon runner in my school days I thought I could closely match these guys. The place had few houses from where the ascent begins. Some local guided us on which trek to take. The others said that we should have asked some local guy to accompany. As we started our ascend we realized it was not what we thought it would be. Yes, our lungs were panting for air. The heart was beating against the chest, we were tired and had climbed hardly 600 meters. Soon few barking dogs blocked our way. Got slightly scared that if one of them bites us it would be a trip gone wrong. After few minutes we spotted a local walking down. He suggested the place is some 5kms and we may not reach before it is dark and that there was snow at the top.

We thanked the Dogs and the man who sounded rude at that moment, but later showered all praises for they saved the day. For had we ventured ahead don’t know what would have happened, for we had no food, no shelter arrangements, or even enough layers.

We were advised that we should have spoken with locals and taken a pony and a porter and rather should have planned the stay in advance. We realized that we were making a folly and hence decided to come back and reach the car.

The dilemma continued for some time and I even explored and made an attempt if we could find horses for they would be faster and we would have a guided tour of the place. Enquired with few locals there- they said could be arranged but it is late now also the charges they asked per person were 1500.At first instance, the price appeared too exorbitant but subsequently I realized it was called for. Any way we dropped the idea and convinced self that we have had some feel of the place…Bugyal the meadow is something that I had experienced previously also. We had a place to reach.

View all posts by onelifeashwani